Editorial | Nepal’s judiciary in crisis: Collusion among the judiciary, executive and legislature must end to ensure reforms

The rot runs deep. The Chief Justice’s ouster alone will not guarantee reforms. The PM, former PM and top brass of political parties need to come clean as allegations of collusion and other forms of misconduct are levelled against them. If not, they should also be accountable on moral grounds. 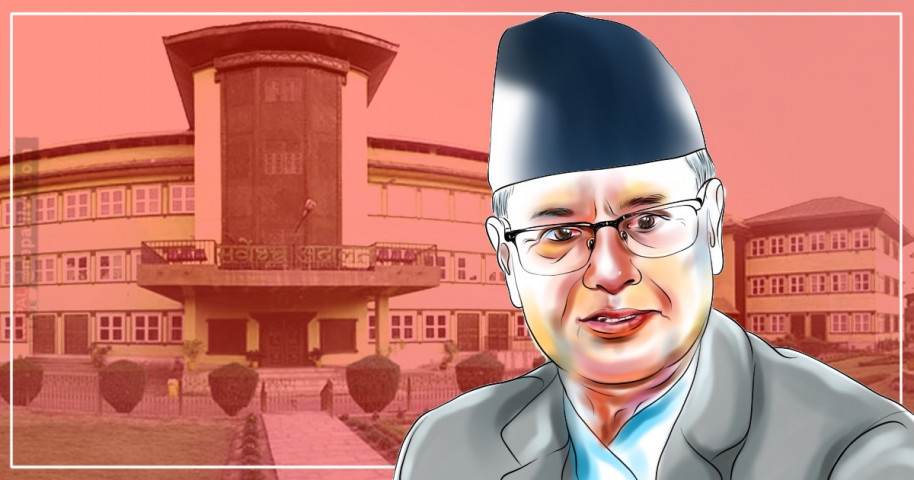 Nepal’s judiciary is in a crisis of unprecedented magnitude. The institution that is supposed to be incorruptible and uphold integrity, impartiality and rule of law is being criticized in loud voices due to its deviation from all of its perceived values.

In the eye of the storm is the Chief Justice of the Supreme Court Cholendra Shamsher Rana—who is at the receiving end of allegations that are unprecedented in the history of the judiciary in Nepal. Several media reports earlier this month exposed that he had sought his ‘share’ in the cabinet. The list of allegations against him runs long: he is accused of obstructing the justice process, adopting a selective approach in taking up cases, opposing reforms in the judiciary, holding in abeyance the case against the ‘unconstitutional’ Constitutional Council ordinance and placing his near and dear ones in the appointments made thereof in constitutional bodies, so on and so forth.

These allegations carry weight. What gives them more credence is they come from not just the public sphere but also former Chief Justices and incumbent Justices, who question whether the Supreme Court—the institution everyone looks up to for impartiality, justice, fairness, transparency and integrity—can continue to command the confidence of the public, given the apparent erosion of its values, principles, and ethos.

It is on these charges that calls for Rana’s resignation, even impeachment if he refuses to step down, are getting louder. Some former chief justices of the Supreme Court have gone to the extent of saying that Rana needs to be removed from the post if further erosion in the justice system is to be averted. This voice resonates within the Supreme Court as well: On Monday, a total of 11 justices boycotted benches assigned to them and even a full court called by the Chief Justice.

Rana, the 63-year-old jurist who assumed office in January, 2019, had an opportunity to go down as a respected Chief Justice in the history of Nepal.  Under his watch, the Supreme Court fulfilled its judicial and constitutional duty by reinstating the House of Representatives, which the erstwhile Prime Minister KP Sharma Oli had dissolved twice—in December 2020 and in May 2021.

[Related: Ugly connivance: People deserve to know about the ‘secret deal’ between the Judiciary and the Executive]

But circumstantial evidence shows CJ Rana has made compromises in principles of the judiciary and also breached the notion of separation of powers. He must be held accountable for this.

The debate, however, should not end here. It would be inappropriate to single out Chief Justice as the root cause of anomalies that have been reported in recent times. The complicity of the executive and the legislature must not be forgotten, nor forgiven, in the ongoing crisis. Granted that Rana sought his ‘share’ in cabinet, why did Prime Minister Sher Bahadur Deuba agree to appoint a non-MP as a cabinet minister? Besides, the collusion between KP Sharma Oli and Chief Justice in the case of appointment in constitutional bodies was reported while Oli was the PM. His hobnob with then PM KP Sharma Oli was not out of the public gaze. Why did not other political parties raise voices against it collectively? Even after a loud and clear message from the judicial fraternity that Chief Justice is involved in malpractices, why have political parties—ruling as well as the opposition—maintained a curious silence? Who is responsible for this situation where politics dictates the judiciary and the judiciary apparently dictates politics?

The legislature should step in when the judiciary and executive involve in collusive dealings. But our legislature also has a tendency to neglect such serious issues instead of taking these allegations head-on.

Let us not overlook the big picture here. The legislature should step in when the judiciary and executive involve in collusive dealings. But our legislature also has a tendency to neglect such serious issues instead of taking these allegations head-on. For example, the Parliamentary Hearing Committee in 2018 received as many as nine complaints against Rana, while his appointment to the post of Chief Justice was being deliberated. The Hearing Committee could have conducted a serious investigation into the complaints. Instead, the committee took the complaints lightly and held a hearing for the sake of formality and unanimously endorsed him. In Nepal, unanimous endorsement is possible only when top leaders of all political parties reach an agreement to a particular matter.

The reality is our political actors agree to elevate controversial figures to the most sensitive positions and then lament later. It has been a norm to change the faces in top constitutional bodies, in case of controversy, while giving continuity to the tendency. The consequences of that are here for us to see. In 2018, when the country got rid of former Chief Justice Gopal Prasad Parajuli—who was accused, among other things, of giving clean chit to the corrupt and delivering justice selectively—the hope among majority of people was that this would herald a reform in judiciary and integrity of the justice system would be maintained. The charges against Parajuli four years ago were similar to some of those for which CJ Rana is being questioned today.

Let there be no illusion. CJ Rana may have become an enigma of our times. But the broader reforms that we all want to see in the judiciary will be hard to accomplish simply by removing him from the apex court. As long as the politicization of the judiciary continues to flourish, so will the erosion of the institution and foul tendencies.

Any aberrations from a person in power need to be dealt with promptly to maintain the delivery of justice from the judicial set-ups. Public scrutiny must continue without showing any leniency to uphold the judiciary’s dignity. Not only the Chief Justice, but the incumbent PM Deuba, erstwhile PM Oli and top brass of all political parties should also be held accountable to keep the judiciary inviolate. This time, parliament should step in. It should not forget its role in the system of checks and balances. As far as much-needed reforms in judiciary are concerned, there must be a broader commitment, followed by actions, from the political actors as well the actors in the judiciary, including those who are boycotting the bench and full court. Nothing is incorrigible. We all need courage to ask questions and hold the leaders and public position holders accountable.