Youth in political parties have been a bigger disappointment because they hardly ever question the conduct of their higher-ups. While young people constitute nearly 40 percent of the country’s population, their participation and influence on national politics remain limited. Sobita Gautam, a young activist from Nepal, believes that more youths should enter into politics to ensure the change and transformation of the country.

“Youth must play an active part to ensure that their vision is implemented for the better. Youths should not just lament for the less representation, instead, they should demand and get fundamental political and democratic rights,” she said in a conversation with Nepal Live Today. “Only their meaningful participation can promote the inclusion of youth in the political process.” Excerpts:

How have you witnessed political development in Nepal over the last few years?

The Nepali political landscape has been fascinating in the last few years, full of triumphs and tribulations. The 2006 People’s Movement paved the way for a protracted debate on gender, caste and religion in the Nepali society. The people have become better informed about their rights as equal citizens, so they have raised their voices through various platforms–from the streets to social media.

However, the transition has not been easy. Transitional justice remains to be settled, and citizenship remains as contested as ever. The hope of political stability brought about by the first periodic elections after the promulgation of the new constitution was dashed as politicians failed to rise above their self-interests. We are, after all, a nascent democracy, and we have a long way to go before we realize the dreams of long-term stability and equality.

Do you feel that the youth in your country is politically aware?

The youth are increasingly becoming aware of politics, especially regarding changing how electoral politics is conducted in Nepal. But the scope of awareness is still narrow. The youth have often failed to keep a constant watch over the way politicians and bureaucrats conduct themselves. Youth in political parties have been a bigger disappointment because they hardly ever question the conduct of their higher-ups.

Nevertheless, recent local-level elections have shown that an increasing number of the youth are eager to take up electoral politics, change the political discourse, and transform the country. The emergence of young independent candidates and contestants from established political parties has shown that the number of youth intending to take political matters into their hands is growing, which is a positive sign.

In terms of population, youth constitute nearly 40 percent of the country’s total population. But this is not well reflected in the leadership positions. Where do you see the gap?

Despite making up around 40 percent of the population, young people are underrepresented in leadership positions in many fields, including politics. This is because the current crop of old leaders is unwilling to embrace and believe in the power of the youth. Most of those senior leaders started their political careers when they were young, but they have forgotten that many young people are just as eager as they were to take leadership roles. Constitutions of political parties are not youth-friendly; they do not even include cut-off age inside the party, due to which ageing leaders continue to hold the position of authority.

Politics is generally viewed negatively by youths. What is your suggestion to change the perception?

Many youths perceive politics negatively because they often see the nasty side of parliamentary politics. This makes them wonder if politics is all about fulfilling the self-interests of a select few. However, this is because of the lack of awareness of the potential of politics for positive transformation. The only way to change their perception of politics is to inform them better about the affirmative changes that ethics-based politics can bring. Once they realise the ethos of democratic politics, they will not only begin to perceive politics positively but also come to the forefront to strengthen it.

As young people, what can you and youths like you do to change the situation?

Of all the political systems we have seen thus far, democracy is the most effective and sustainable for changing the world for the better. So, the youths should enter democratic politics and try to change it from within. Today’s youths do not have the luxury of remaining fence-sitters when it comes to democratic politics. They must come forward and grab it from the corrupt top leadership of established political parties.

Being a youth is not the only qualification to be able to bolster democratic politics. The youths should have a broad-based understanding of politics and history to appreciate the differences and diversities within society. They should have the humility to engage with a diverse range of opinions even if they are squarely contrarian to theirs.

On International Youth Day, what are your messages to our youth readers?

As a young country, Nepal is well-positioned to benefit from the demographic dividend. But to capitalise on that, we need to engage more youths in politics, activism, social work and entrepreneurship. It is high time the youths used their energy to come forward and wrestle power and position from the stubborn, old generation. The elderly, meanwhile, should start grabbing advisory positions before it is too late, for the changing dynamics of Nepali politics may make them irrelevant even for such roles. 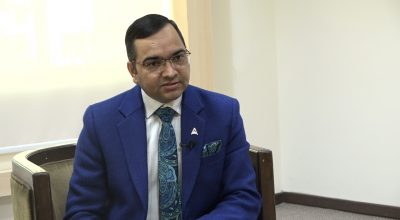 Interview | ‘The Loss and Damage fund is a remarkable outcome at COP27:’ Manjeet Dhakal, Head of LDC Support Team